This portrait could have been painted to commemorate the signing of the first contract with the Postmasters General in 1720 to set up Allen’s Cross & Bye Post. We understand that he agreed to pay the GPO £6,000 – the equivalent of half a million pounds today and we assume he was to pay them this amount per annum on a quarterly basis each year for the next seven years as it is clearly stated in the 2nd contract of 1727.  However no evidence of this 1st contract or any of the other contracts other than the 2nd still exist. This 2nd contract is housed in Bath Postal Museum. It would appear that General Wade became Allen’s patron because Allen had revealed a Jacobite plot to him and therefore he provided Allen with the first funding. At the conclusion of the first seven years a small profit was obtained but Allen courageously proceeded to sign another contract.

Signing the contracts for this licence enabled Allen to organise that the mail which was not addressed to, from or though London would henceforth be delivered by his post boys along his planned major routes which are detailed in the 1727 contract as follows: “Between Exeter and Chester and any places between by way of Tiverton, Bridgewater,Wells, Wotten Underidge, Stroud, Gloucester, Tewkesbury, Worcester, Kidderminster, Bewdley, Bridgenorth, Shrewsbury, Whitchurch and Chester, all letters passing or to pass by the way of Bath, Devizes, Marlborough, Wantage and Abingdon. And to all places or towns adjacent, three times per week and Allen will have full power and authority to manage proper costs and charges, carry and convey and send post all the letters and pacquets in the above Cross Road or to Oxford and to all or any of the places or towns adjacent in the Counties of Devon, Somerset, Gloucester, Hereford, Worcester, Salop, Chester, Oxford and South Wales. This applies to all letters adjacent to any of these towns or places on the specified road. It also stated that after the commencement of this present grant Ralph Allen will further agree to set upon the regulation of the Kent and Yarmouth Roads and to cause the several Deputy Postmasters to account for all profits at their respective stages.

In addition the 2nd Contract which was signed by the Postmasters General for Allen in 1727 also states; “all the letters which are described as to, from and through London also all mail from Scotland and Ireland and all ‘pacquets’ meaning ship letters from overseas, are to be known as ‘Country Letters’ and the revenue from these is to be carefully recorded and paid over to His Majesty’s Postmasters General every six months.  The “go free” permission for the letters of Members of Parliament is also to be observed.” It seems that Bye letters are the ones which are delivered close to main towns and Cross letters are delivered directly to the towns listed on the Contract.  We refer to Cross & Bye posts as Ralph Allen’s Inland Mail making it easier to understand.

This information has been extracted from the original 1727 contract, the only one in the country that now exists and this can be seen on display at Bath Postal Museum. 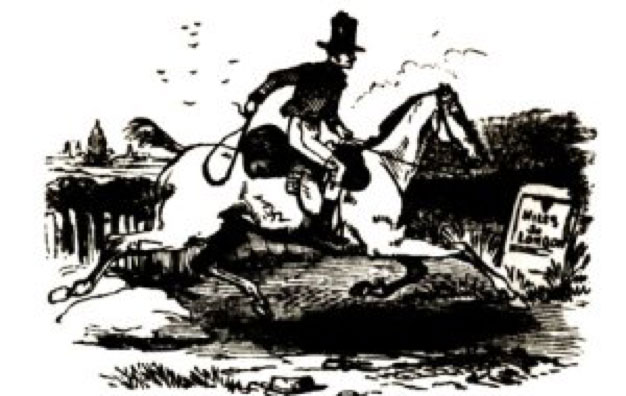 Ralph Allen’s post boys, so called but they were mostly men, delivered the letters. Allen provided the horses and harnesses and they rode for five miles or more during one hour. That was enough demand on one horse, and they left their letters with a Deputy-Postmaster either at a tavern, a bakers, or other stages which Allen himself set up. Years later Post Offices took their place. The Post Boy would return to his hometown no doubt carrying mail in that direction and another Post Boy would collect the on going letters and continue.  It seems this was like a relay until all Ralph Allen’s inland mail had been collected and delivered on that Delivery Day. This took place three times each week. Allen employed two Surveyors who were legally appointed by the Postmasters General, to be constantly checking on Post Boys and Sub-Postmasters.  It is thought that Allen himself covered the area mainly on horseback checking on his Surveyors.  Once the 1727 contract was signed covering the next seven years others followed every seven years throughout Allen’ s lifetime   The payment remained £6,000 per annum  However, after 1727 the money received by the Deputy-Postmasters from the general public, which they paid to receive their letters, increased. Eventually Allen was able to purchase his first stone quarry from his postal profits because by this time he had made the acquaintance of John Wood (the elder) whose artistic ability, later with the help of his son, designed Georgian Bath.  These men worked together, Allen purchasing more stone quarries and running his now profitable inland postal system.  The sale of stone initially made Allen a wealthy man and he was able to build his Palladian mansion Prior Park on the hillside “To see all Bath and for all Bath to see”.

However transportation became a problem when he provided stone further afield in London, Exeter and elsewhere.  Allen invested money in trying to make the River Avon navigable but without success, the canals had not been built and there were no railways.  So it was the ineffective roadways that were used by slow lumbering carts and horses and this was expensive.  At these times the quarries did not always make a profit and Allen subsidised them from his postal profits.

He remained Postmaster of Bath which he had become when aged 19, and he continued to sign seven year contracts to licence his inland mail with the GPO.  Although the amount remained at £6,000 per annum, at the signing of each seven year contract more postal routes and increased deliveries were included so that he ultimately covered the whole of England to the borders of Scotland and into South Wales.  Evidence has shown that his brother Philip, who lived in Bath with his family, became Postmaster between 1748-1765 assisting brother Ralph with his increasing postal activities and stone quarries because by this time Allen was in poor health.

Memorials to Philip who died in 1765, and his large family can be seen in a chapel in St. Nicholas Church in Bathampton. He outlived brother Ralph by one year.

The successful organisation of Allen’s Cross & Bye posts (or Inland Mail) during 40 years saved the GPO £1,500,000. This organisation was recognised by the Postal Surveyors employed by the GPO and they succeeded in convincing the Post Masters General that Allen’s organisation should continue unchanged after his death.

A large stone memorial known as a Mausoleum, recently restored, dedicated to Ralph Allen who died in 1764, stands in the Churchyard in the village of Claverton where Allen had set up a school for the village children. Allen had married twice firstly in 1721 to Elizabeth Buckeridge of St Bride’s London. In 1736 he married Elizabeth Holder daughter of the Squire of Bathampton Manor. She was said to be an heiress and she is buried with him. Their only child, a son called George died in infancy. Ralph Allen became Mayor of Bath in 1742.

Allen became known as the Benevolent Man and a biography by Benjamin Boyce bearing this title was published in 1969.  He provided the stone to build the Royal Mineral Water Hospital in Bath and generously provided the Bath Stone for St. Bartholomew’s Hospital in London (known as Bart’s). He paid for the education of Henry Fielding’s children and in his book entitled Tom Jones Fielding seems to have based his character Squire Allworthy on his friend Allen. The publication of at least one of Alexander Pope’s books of poems was sponsored by Allen.